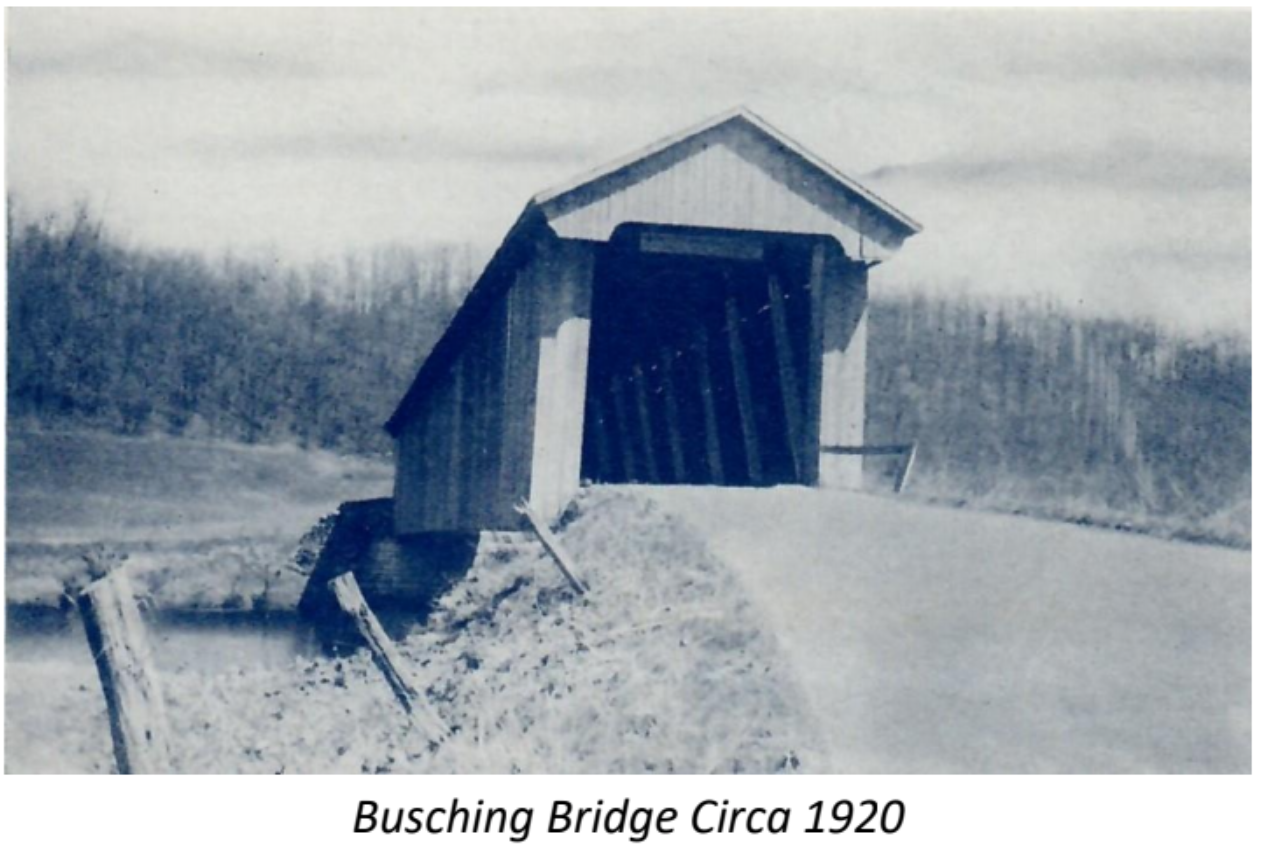 The Busching Bridge, likely named for the Ernst Busching family that lived nearby, is located on County Road 25 South one mile east of Versailles. It was built in 1885 by Thomas A. Hardman of Brookville, Indiana. Hardman was a local builder who later achieved notoriety by rebuilding many of the bridges In Dearborn and Ripley Counties destroyed by the Confederate raider John Hunt Morgan. Hardman built 4 of the 7 covered bridges in Ripley County. Of those seven, just two remain – the Otter Creek Bridge, just west of Holton and this one. But this one, the Busching Bridge, is the only covered bridge in Ripley County that still carries traffic. Busching Bridge Circa 1920

The bridge contract stated the cost would be $20.80 per linear foot and was to be completed by October 20, 1885. The bridge is 15.5 feet wide, 16.5 feet high and 176 feet long, which means it should have cost approximately $3,500 to build, but for some Hardman was paid just $2,200 for this project. The timbers for the bridge were cut from the site of the Versailles Baptist. The bridge has red painted verticalsiding. Windows with awnings are located on either side of the bridge at the half-way point, which allows visitors to briefly stop and admire the beautiful Laughery Creek and surroundings. 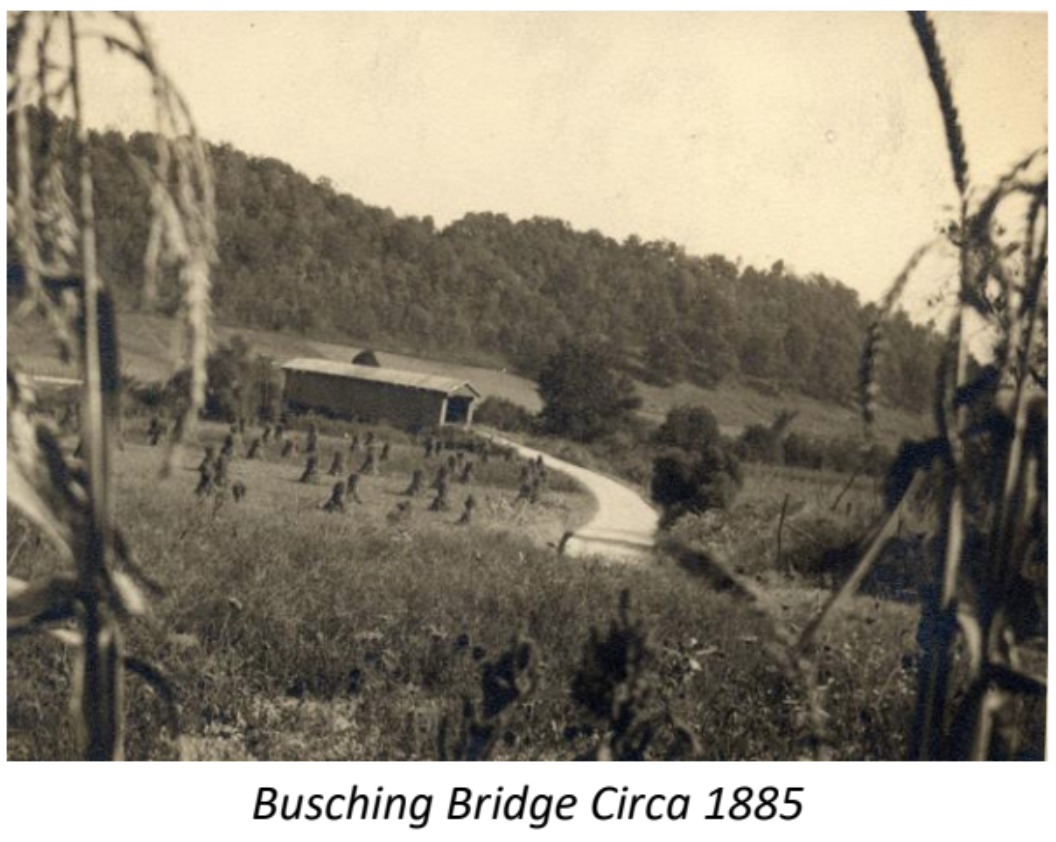 The Busching Bridge is an example of the Howe truss design which signaled the start of metal construction in bridge building. The Howe truss system was the product of the imagination of William H. Howe. Born into a family of inventors in 1803, he worked as a millwright before patenting his truss system in 1840. The Busching Bridge, however, is a modified Howe truss. The wooden x-bracing, which is in compression, and the metal tie rods, which are in tension, are of different dimensions. By varying the sizes and dimensions of the structural members, the truss expresses its sophisticated design. It has stone supports and wing walls.

The Busching Bridge was located on what was Highway #4, then called the Versailles-Dillsboro turnpike, and served as the gateway to Versailles for people traveling from the East.

In 1930, however, as part of the relocation of Highway #4, a new entrance to the Versailles State Park was built. This construction included a new concrete bridge 1⁄2 mile south of the bridge. Thus, the Busching Covered Bridge was no longer part of the main road. 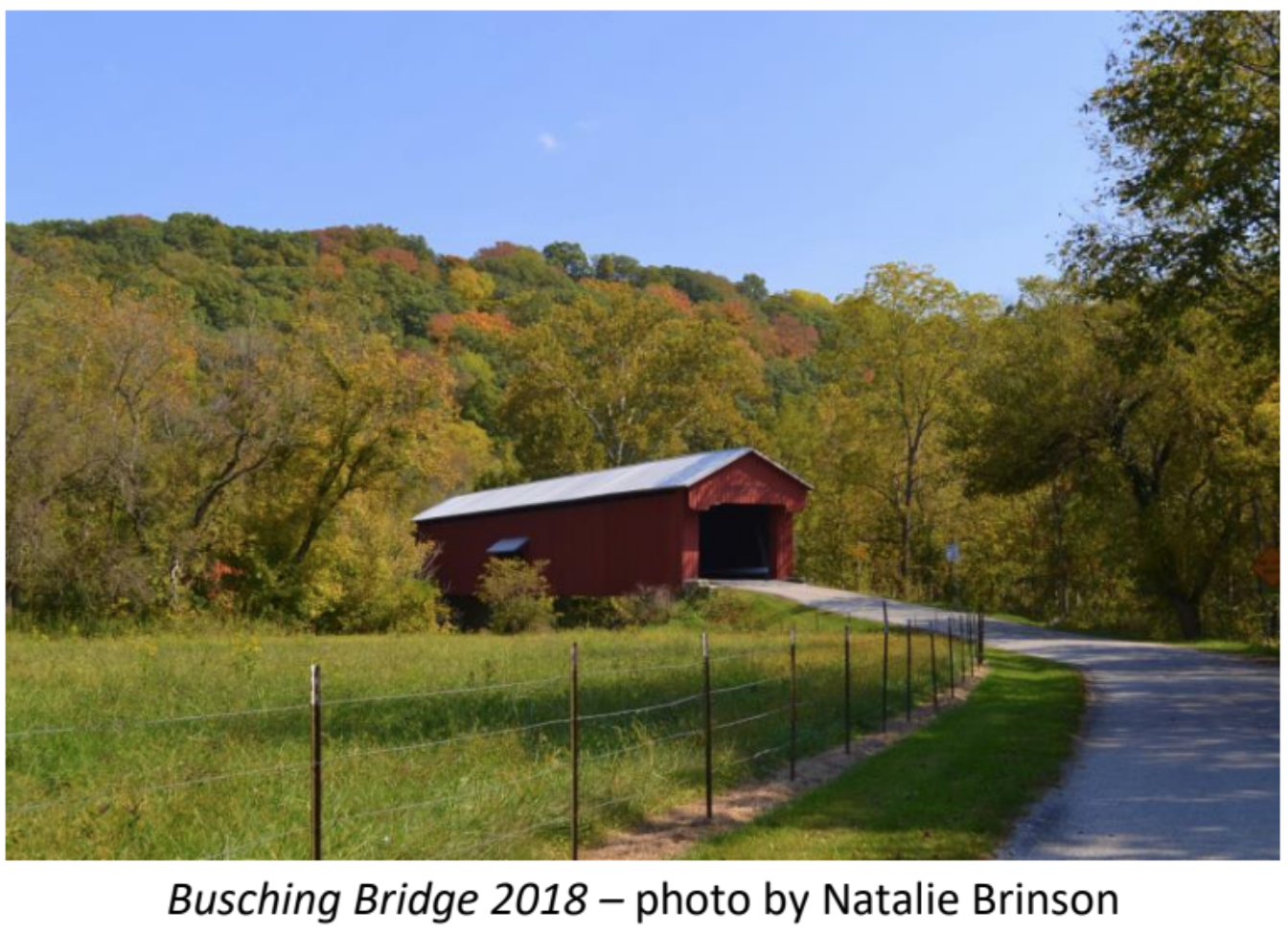 In 2005, the bridge was completely restored by CLR, Inc. of Vincennes and Amos B. Schwartz Construction. Today, the bridge continues to carry traffic. Every year thousands of Versailles State Park visitors take the short cut through the old wooden structure to Versailles. The Busching Bridge is accessed by taking Perry Street in Versailles east down the hill to Laughery Creek and by way of the Versailles State Park entrance road on U.S. 50.